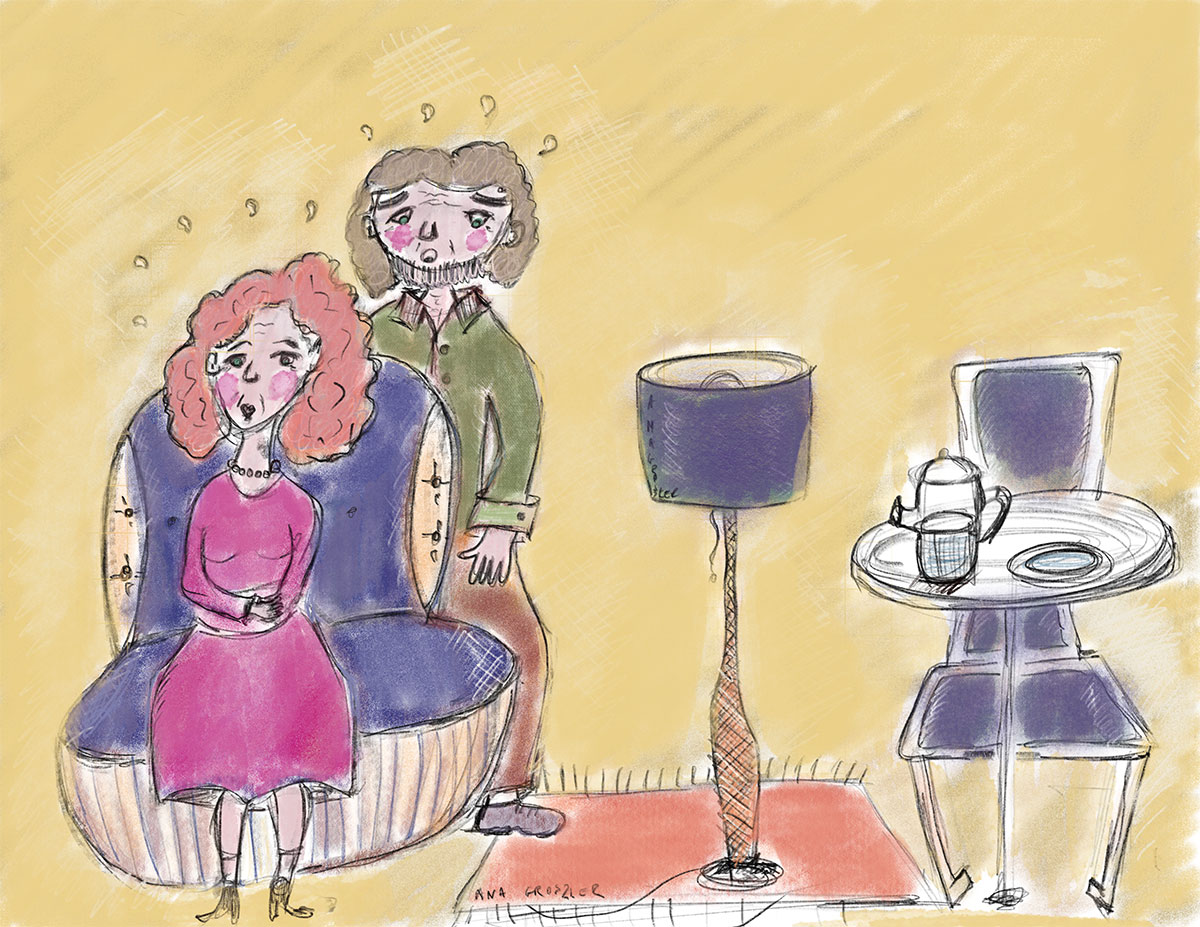 The Carpet in the Yellow Room - Short Story

The Carpet in the Yellow Room

“Have you ever been to the Police Station?”

“I see no point in that, Sir. If I want to take a walk, I go to a Thermal Resort, not to the Police Station.”

“I suppose you are right” said the Mustache Man and after that he puffed from a cigarette slowly, he flicked the ashes over the floor.

A grayish cloud fumed slowly into the new Persian carpet, bought from an old woman at the Flea Market.

My wife gave him a killer look and I froze.

The Mustache Man didn’t seem to notice, though. He was standing up with that know-it-all face. ”Oh, Lord, how could he have caught us?” He gazed upon us and smiled. He had thin lips and a crooked smile, showing an unusual set of white teeth. Then he coughed. “This was it,” I thought to myself. We were doomed.

“Would you like a glass of water?” asked my wife, breaking the silence.
“No, thank you,” said the Mustache Man and until we could have said or done anything, he sat down on the floor, with one knee up, sniffing and touching the rough fabric.

Then he put his ear on the carpet, staying still and listening to something.
Salty drops fell down my forehead. How could he have concluded it so quickly? I stared him, dumbfounded, but with admiration, though I knew that this was his job and in his line of duty, if you don’t figure out things fast, you could lose clients and go to sleep on an empty, sad stomach. But I still didn’t get it how he did it. Suddenly the man flinched and pulled the carpet aside like a hunter after the scent of his prey. My wife sighed and I pressed my hand against my heart. Our family health history recorded no strokes, but I was about to have one. My stomach ached, I felt as if some bird wings were moving down my throat and in my chest, and the room was spinning. Its yellow walls were crouching in a twisted dance, squeezing me tighter and tighter. The pressure was unbearable.
I wanted to scream: “come on, man, you are killing us with this useless suspense. We know that you know, so there is no sense in prolonging our agony!” I felt so ashamed that I could almost punch myself. But the facts were beyond my comprehension. Till yesterday I used to think of myself as an old respectable man, but I was just another old fool. It was too much, so I decided The MOMENT had come. My wife squeezed my hand so hard that she almost broke it.

She understood like she always did and let my hand go. I coughed slowly, trying to get the detective’s attention. Nothing. The man was too caught up in his work. He rubbed his palms against each other, pulled that damned trap and gave a look inside. After some long seconds he turned around and looked at us with a dumb face and then he said the saving words.

I came closer, sort of relieved:

“No joke, sir, you caught us! We stole Esca’s quinces. Year after year, fall after fall, we jumped over the fence, into her backyard, we picked and stored them in here, then we made jelly. We hoped that our trail would be lost. But this woman is like a spaniel. She found out the truth. I guess she knew it all the time. Just needed a proof.”
“Who the hell is Esca? And what does she have to do with all of this anyway?”

The detective was bewildered, you could see that clearly, and so were we. What did he expect to find in there? He smoothed his mustache with a pensive expression on his face and then he screeched himself behind the ear. He was so disappointed that I almost felt sorry for him. He sat on the chair than he lit a cigarette and pulled it in anger. Once. Twice. Then he ashed the cigarette and rested his head slowly on the chair. The greyish cloud spread all over the floor. My wife gave him another crossed look: “just couldn’t help it, you dumb detective,” her eyes were saying, but her mouth, fortunately, didn’t move. I just sight. Suddenly, the man stood up and slapped his forehead.

“Oh, the idiot!” he shouted.
“That good-for-nothing Buffoon! I should fired him a long time ago. But he begged for one more chance, he begged me with tears in his eyes and I gave him another chance! And he gave me the wrong address,” said the detective purple with rage. “Imbecile!”
“Sir, please, relax!” I said, trying to calm the poor man down. “Have a glass of water and some confiture, you know, from Esca’s quinces.”
“Oh, cut it out with your quinces, old man, and leave me alone,” said the detective and stormed out, mumbling and cursing.

My wife and I looked at each other, nodded and then, we shut the trap. Happy that the
detective left the building and left us alone, I covered the trap with the carpet, but I remembered that I needed to do something more. I pulled once again the carpet, I opened the trap and got a jar with confiture. I put it gently on the table, next to two empty glasses and a carafe with cold water.

“We surely deserve some confiture after this long, exhausting day,” I said. “Tomorrow we shall tell Esca the truth.”