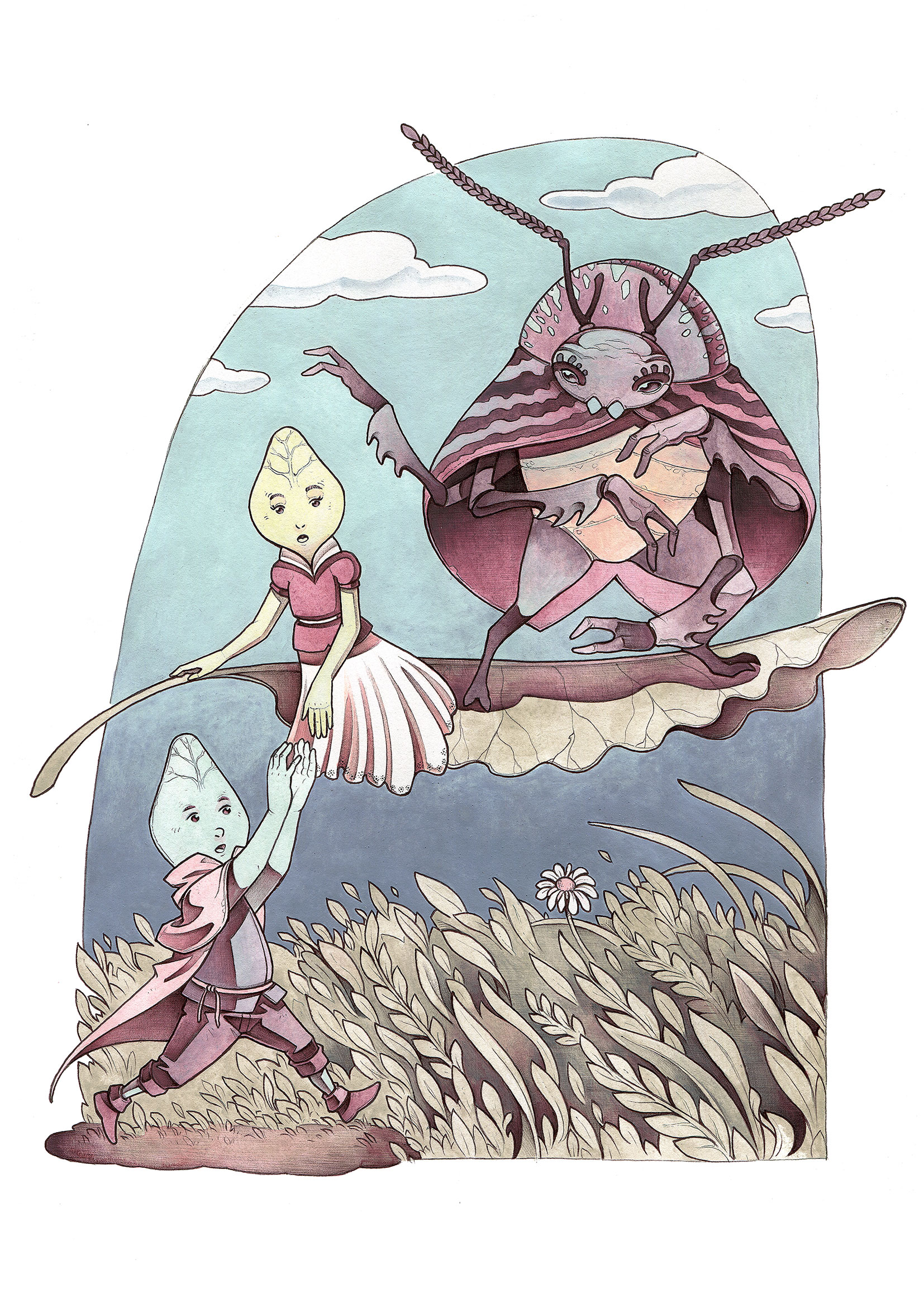 Little Spinach Spanacescu, the youngest in a family of spinach, lived next door to Lobodescu
family, a nice family of red orach who had a beautiful girl, Greeny.

One day, in Happy Vegetables Land appeared a mysterious rascal, with no manners what so
ever, but with plenty of attitude issues, who decided to take a break from his journey around
the world, right in Greeny and Little Spinach neighbourhood. He was the beetle Bug Bug, a
lonely and naughty creature from the Smelly Sewers Valley.

Hidden behind the tall, thick stems, Bug Bug watched the children playing and laughing.
He liked Greeny so much, that he decided to take her away with him, to keep him company
in his unfriendly home.

So he waited patiently until the lights went out and the veggies went to sleep in their tiny and
comfy beds. Then, like a shadow, he tiptoed his way into Lobodescu’s house and grabbed
Greeny. The little girl screamed for help, but no one heard her. Such dismay when the parents
discovered next morning that their daughter was missing! Thoughts black like ravens surrounded
them and the poor souls went to Spanacescu family for help.

“I must find and save Greeny”, said Little Spinach once he heard the whole story and ran
like the wind to Mrs. Mole, the wisest woman in the whole land, to seek advice.
Mrs. Mole lived in an underground cottage. She was kind and sweet and extremely smart, but
had a really poor sight, which made her walk funny and bump into all sorts of things. It took
her a while to find her thick glasses and after she found them, she put them on her tiny nose
and glanced through the crystal ball on a small table. The ball was not an ordinary one, it was
magical. It could reveal amazing things to those striving for knowledge and it showed
Little Spinach the evil Bug Bug flying on a burdock leaf with Greeny, heading to his home.
“What can I do, Mrs. Mole?” asked Little Spinach worried.

“Have faith, dear boy, we’ll save your little friend”, said Mrs. Mole with a soothing smile on
her face. She walked slowly to an enameled pot and cracked a bit the lid on it. Then, she took
two spoons with powder , which she put carefully into a small pouch and gave it to Little
Spinach.

“This powder will help you defeat Bug Bug”, said her. “It is called The Sparkling Powder
and only a few know about it. When you’ll encounter the big, bad beetle, throw it in his face
and this will be it. He’ll regret that he upset such a brave spinach as your self. Have a safe
trip and the good spirits of vegetables may protect you.”

Meanwhile, Bug Bug and Greeny moved really, really slow, almost at a snail pace. The little
girl was tired, homesick and she didn’t enjoy at all Bug Bug’s stinking presence. She invented
all sort of excuses, just so they wouldn’t get too early to Smelly Sewers Valley.
Greeny was either thirsty, or hungry, or sleepy, or dizzy from flying on the burdock leaf. Truth
to be told, Bug Bug was a bit bothered by all these complaints, but he really liked Greeny
and wanted to befriend her, so he didn’t dare to say anything. With all the interruptions, Little
Spinach had enough time to catch them.

When Greeny saw him, her face lightened up like a sunny morning, but Bug Bug’s face
blackened with anger. “What an imprudence from someone so small and puffy!” he thought
aloud.

He walked towards Little Spinach puffing, thumping and with his eyes popping out like two
purple onions. Greeny was terribly concerned for his friend well being, but Little Spinach
stood up tall and faced Bug Bug fiercely. He took The Sparkling Powder out of his pocket
and threw it in Bug Bug’s face, just like Mrs. Mole taught him.

Bug Bug started to scream, jumping up and down.

“Oh, noo, this must be The Sparkling Powder! I don’t want to be all clean and smell nice! It
is a family tradition to be stinky, I can’t break it.” But Little Spinach and Greeny were not
impressed by his big and salty, crocodile tears. They continued to look at him, with patience
and compassion. It was not his fault for being the way he was.

After a while, the screaming stopped. Bug Bug was not crying anymore. His face looked
peaceful and he was smiling. He smelled so good, like he had always been best friends with
soap and water.

He didn’t even had that malicious spark in his eyes anymore. Well, Bug Bug was now cleaner
and kinder! He asked Greeny and Little Spinach for forgiveness and offered him self to take
them back to their friends and families. He even asked them to take him in and let him keep
their home safe from predators.

Back home, Little Spinach had a great welcome back party, just like a great hero would have
had. And since that day, spinach became one of the most favourite vegetables for children
everywhere, such as your self.